On our previous version of Breakdown of the Band, we analyzed and rated the discography of the Israeli progressive/oriental metal group Orphaned Land, which you can check out here. We’re excited to be continuing this series with yet another significant and prolific artist, Demonic Resurrection.

The Indian extreme metal act was one of the bands that initially piqued my interest in regards to the globalization of metal, even prior to the creation of this site. The only consistent member throughout the band’s history is vocalist/guitarist Sahil ‘Demonstealer’ Makhija, who has also been involved with Reptilian Death and his solo Demonstealer project. Although this list only contains the records released by his main band, Demonic Resurrection, we may update it in the future to include the two aforementioned projects by Makhija. Below, you can check out my thoughts on all five of their full-length studio albums. 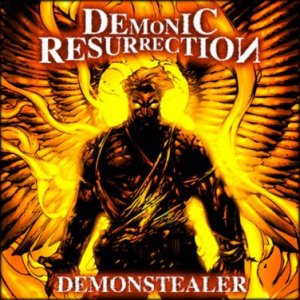 Released via Demonstealer Records in 2000

As stated by founding member and band leader Sahil ‘Demonstealer’ Makhija regarding this debut LP, “most bands have that one album they are not proud of and this would be the one that we as a band obviously rate the lowest in our catalog.” He continues to explain that the production is to blame, not so much the actual songs and for the most part, I would agree. The mix is uncomfortably muddy, simulating an inside a band practice garage listening experience. Looking past the nearly unlistenable production, the compositions on here actually show a lot of potential with concern for rhythmic pacing and variety, especially considering the members were teens at the time. Furthermore, the material shows a slight sense of identity with gothic/symphonic elements being added to the sometimes blackened death metal. Still, the strained vocals, underdeveloped lyrics, and simplistic melodies evoke a certain amateur status. It may be far from a necessary listen, but it’s an endearing historical moment for the band, showing a youthful passion and drive.

Notable Tracks: “From the Ashes”

You Can Listen to Demonstealer Here

Released via Demonstealer Records in 2005

Wow, it’s truly stunning how a professional production can make such an outstanding difference in the quality of music. In addition, a dramatic lineup change revealed a much tighter and complex musicianship throughout this whole LP. While it doesn’t fully fill the void of a permanent lead guitarist role, a few guest musicians spice up these tracks with guitar solos. The commanding vocals, guitar, keys, and drums all shine much brighter than before and unveil an unmistakeable stylistic variety. Such diversity comes at a risk as their buffet of styles from symphonic, death, black, and progressive metal doesn’t always congeal cohesively. Nonetheless, this album displays solid material indicative of a growing excellence within Demonic Resurrection.

Notable Tracks: “Dreams of the Dead,” “Apocalyptic Dawn,” “Spirits of the Mystic Mountains”

The Return to Darkness

Released via Candlelight Records and Demonstealer Records in 2010

If the transition from Demonstealer to A Darkness Descends showed a jump in production value, The Return to Darkness shows a mile long leap in musical progress. Besides the instrumental opener, all tracks clock in at over five minutes. Usually I’d argue that such lengths tend to be excessive in the realm of death metal, but the band balances everything quite cleverly with pieces cycling through the motions of rhythm guitar at the front and center, then keys, then lead guitar, and repeat. Mephisto’s keyboard melodies added slight depth to the previous LP, but on this album, the extra atmospheric tones and stirring orchestral synths allow for a more wholly epic and symphonic experience. Although this record is impressively extreme and holds a state of constant momentum from front to back, the dense songs sometimes lead the listener to needing some space and air to breathe.

Notable Tracks: “The Warriors Return,” “A Tragedy Befallen,” “The Unrelenting Surge of Vengeance,” “Dismembering the Fallen”

Released via Candlelight Records and Universal Music Group in 2014

Comparatively, The Demon King isn’t as in-your-face heavy and technically intense than its predecessors, however it still packs a death metal punch to the gut and proves that Demonic Resurrection isn’t a group to rest on their laurels. While not a drastic shift, the slight emphasis towards a more nuanced songwriting approach is noticeable and comes with pros and cons. As previously stated, The Return to Darkness was an extremely hard-hitting LP, but suffers from convoluted musical moments where this follow-up record respectfully shows more restraint. Although such restraint sometimes results in less immediately satisfying pieces, the material displayed is developed and serves as the necessary transition to the next album.

Released via Demonstealer Records in 2017

Damn, there’s so much to unpack in this colossal beast of an album. First off, let’s start with the concept. Throughout Demonic Resurrection‘s catalog, we see a rough pattern of conceptual storytelling with some albums being more successful in that vein than others. Dashavatar however ambitiously puts the theme as a priority with each song pertaining to an avatar of Vishnu and therefore granting each track to feel equally powerful and purposeful. This focus on a central theme is not only a unique and interesting path, but also a beneficial factor towards the lyrics, instrumentation, and pace. Delving into the actual music, these pieces are without a doubt the most mature and progressive compositions the band had conjured up. The assertive heaviness and technical complexities from the previous releases still shine through, but a greater emphasis on melody, dynamics, song structuring, and variety is unearthed. By far, the MVP award would go to the lead guitarist with each riff and lick standing out very strongly and truly creating a lasting impression. While it is a bummer that Mephisto’s previously impactful symphonic keys are absent (besides his guest appearances on tracks 3 and 4), that loss is filled in with other instrumentation and vocal deliveries. The use of sitar on the opening track and tabla percussion in various songs furthers the band’s distinct style and hits home that even Indian instrumentation can also belong in heavy music. When the female vocalist briefly arrived in “Kurma,” it brought nostalgia and a notion of circling back to the female vocals within the debut LP. Overall though, every musical element fits in so smoothly to where there must have been an extensive amount of time and thought put into this record. Dashavatar is by far one of the best metal albums to come out of not only India but also the Middle East/Asia.

Alike our previous edition of Breakdown of the Band with Orphaned Land, chronologically experiencing Demonic Resurrection‘s discography revealed their commendable evolution. Whether you prefer their more abrasive death metal, the symphonic, grandiose production and storytelling, or their proggy experimentation, it’s impossible to deny the band’s altogether stellar and varied songwriting. Although certain albums in the group’s catalog can definitely suggest similarities to specific influences, it’d be difficult to pinpoint another band that holds such unique qualities and breadth in their metallic diversity.

Beyond the band’s musical feats, it may be even more notable that they are responsible for opening the gates of Indian metal and bringing awareness to the country’s growing metal scene. I likely wouldn’t have discovered Indian metal if it wasn’t for Demonic Resurrection and there are countless other bands within India that also hold this group as a main inspiration. Unfortunately, the future of the band’s musical output isn’t exactly clear as frontman Sahil ‘Demonstealer’ Makhija has expressed in interviews, but the band ended on an extraordinarily high note with the last LP. And luckily, they continue to occasionally play shows and book tours. Regardless of what the future of Demonic Resurrection holds, it is undeniable that they have made a significant impact on the metal genre.

Side note: The Beyond the Darkness EP wasn’t included on this list, but if you’re looking to bridge the gap between A Darkness Descends and The Return to Darkness as well as complete the trilogy, it’s a worthy five-track continuation of their symphonic death metal. And again, if you’re intrigued by Demonic Resurrection, check out Makhija’s other projects Demonstealer and Reptilian Death.