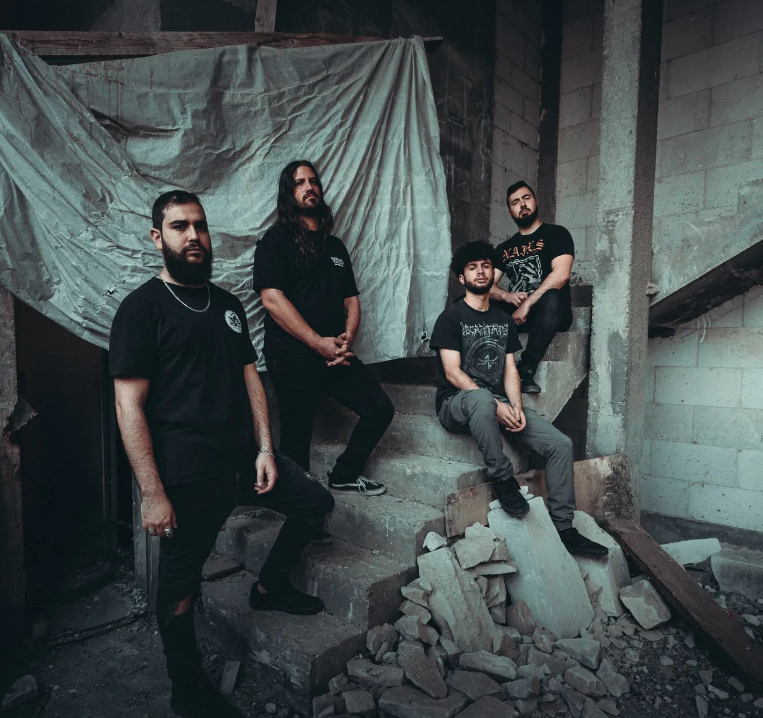 As some of you may already know, Sinnery released their second album, Black Bile, a couple months ago, which I wrote a review of for this lovely site. However, that review was just scratching the surface of what the album, and by extension, Sinnery, are all about. And who better to give you those insights than the wonderful band members themselves?

Take it away, guys…

What does the album name “Black Bile” represent?

Alon Karnieli (vocalist / rhythm guitarist): In Medieval-era physiology, people believed four different substances flowed through the human body, one of them being “Black Bile.” It was allegedly secreted from the liver or intestines, and was thought to be the cause of depression and misanthropy in humans. Obviously, this term doesn’t really exist anymore, but we decided Black Bile is everything that’s bad in us, and prevents us from becoming better people or doing what we’d like. All those things, the depressions, the bad experiences, our inner demons, that’s Black Bile. In our music, we talk about the bad things we live through. We ended up in a scenario where we use our Black Bile to make something good, and maximize our potential as human beings.

Where did the bold decision to include two doom metal songs (“Sever” and “Holes”) in a thrash metal album come from?

Saar Tuvi (bassist): Who cares? We don’t fall under those definitions of thrash metal, doom metal, or anything else. At the end of the day, we do whatever is fun for us, whatever we enjoy playing, and whatever sounds best for us. We all come from a very broad range of music genres we listen to. It’s restricting to stick to one specific genre and say “I’m only gonna do this” without looking elsewhere. We feel as though there’s no reason not to experiment or break boundaries and say “now I want a slow riff, now I want a fast riff, now I want a jazz ballad or something.” If that’s what we want, we’ll do it too.

Alon: Beyond that, whenever we write music, we 100% do so for ourselves. Once everything’s been written and it’s time to produce it, we start to think about who’ll listen to it. But at the time of writing a song, it’s purely comprised of what we like to hear, derived from that mix of us as friends in a band. We work to find something cool we can make together.

In what other ways are you planning to change your sound in the future?

Idan Kringel (lead guitarist): As time passes, more things influence us and we become more open to different styles, so I think it’s hard to predict what it’ll be in the future. Like Saar said, we feel content doing what we do.

Alon: Whenever we write anything, our decisions are done in the moment. And if we want to do something in that moment, however it may come out will be our sound for that moment, day, or year, and that’s the beauty of it. I think as people, we love music before we love metal. We just love music because we enjoy listening to it, and that’s our opening to say “let’s do what’s fun for us, what flows with us, so who cares how it sounds?”

Which bands influenced you most during the making of Black Bile, as well as your first album, A Feast of Fools?

Idan: We were around 16 when we wrote A Feast of Fools, so back then, we were very influenced by classic thrash bands like Metallica, Megadeth, Sodom, and especially Annihilator.

Alon: Back then, I would listen to Annihilator‘s Never, Neverland album on loop, and they always had that running theme of insanity, which is also present in A Feast of Fools. I was in love with that band and their first two albums.

Saar: Black Bile had way more influences. I think its process was a lot more natural due to more people being involved in the writing phase, with all of them coming from different places, musically. It would be difficult to name the bands that influenced us most because the album teeters atop such a wide range of styles. There’s still influence from Metallica and Megadeth, but also Pantera, Behemoth, and Gojira. The older we get, the more bands we add to our arsenals.

Alon: During the timeframe between A Feast of Fools and Black Bile, we kept listening to music and were subsequently exposed to more things. The influences ranged from thrash metal to death metal and black metal, even rap, R&B, blues, soundtracks, what else? You take something from here, mix it with a dash from there, and the result is a concoction you enjoy.

Of all the songs you’ve ever written, which one are you most proud of, and why?

Idan: I think every person here’s gonna have a different answer. I’m quite proud of a lot of songs we’ve written, and we’re able to outdo ourselves each time in our writing and the vibe a song projects. Personally, I’m most proud of the song “Holes.”

Alon: Well, it depends on how you look at it and which aspects you’re taking into account. In Black Bile, I really like the song “Sever.” I think with it, we were able to deliver something we’ve been trying to for quite a while, which is an amount of emotion I always wanted to have in a song of ours. But then some songs I’m proud of not because of how they sound, but because of how we wrote them; the experiences I had writing them, recording them, and the meet-ups. I’ll have memories of the creation process. For
example, what it was like to write and sew the song “Bleak” together, or Black Bile’s title track. The latter marked a turning point in our writing, it was a moment that made me think, “Wow! We finally managed to bring something to the table that we weren’t able to before.” Don’t get me wrong, I like how that song sounds, but the experience I had behind it with the rest of the band is what makes me most proud of it. We made something together as friends and outdid ourselves.

What were your goals when you first founded the band, and how have they changed over time?

Alon: Our first goal was to play music and do live shows [chuckles]. I think we can check that one off the list. Our goals changed because the scale of everything we do keeps growing. Once in a while, we all sit down and have a conversation where we ask, “Where were we two years ago? Where are we now?” As long as we keep on going, we’ll discover more goals to accomplish. At first, our goals were to play music and perform live, then write enough songs for a set, then record an album, publish it, do bigger live shows, release merch, perform abroad, record another album… it’s self-perpetuating; we write an album, then want to release a record. We release the record, then want to fly abroad. We fly abroad, then want to record another album. It’s a cycle comprised of our experiences and where we think we should go next, rather than perfectly following a laid-out plan.

Idan: We also aim for our work to reach as many ears as possible.

If you could choose to play live with one other band, whom would it be, and why?

Alon: Metallica. Just because. It’s pretty fucking obvious, they were the band that started it all for me. I saw them, said “I want that too,” and here I am.

Idan: A no-brainer, Metallica for me too, for the exact same reason.

Saar: Now that Pantera‘s seeing a reunion, it’s tough for me to say because I’m a total Pantera fanboy. I’m gonna say Metallica just to appease my pals.

Are you sure you guys aren’t just saying that to piss me off for wearing a Megadeth shirt? [everyone laughs]

Saar: I’m such a sucker for Pantera, they’re my favorite band. That being said, I never really thought about whom I’d most like to perform with. Metallica‘s an obvious choice for many reasons, but I’m still not sure. That’s a tough question.

Liam Fine (drummer): For me, it’s Meshuggah because they’re my favorite band and I’d love to meet them, let alone see them. It’s Meshuggah, no doubt about it.

There are terrible things going on all around the world 24/7, and it can make life feel hopeless at times. However, watching these guys turn their own “Black Bile” and use it to make something great, all while being really fun to hang out with? There’s something reassuring about that.

This is what I love about interviewing bands; their music can already be profound and thought provoking enough as it is, but getting to hear their input can add so much more depth to their art. Hell, sometimes you come out of the interview with more positive ways of looking at life you’ve never thought of before. And if that ain’t metal, I don’t know what is.

As always, check out the band’s socials, and Happy Holidays, everyone!